As services and special events have been taking place across the world to remember those killed or wounded in conflict, marking 100 years since Armistice Day, Kitebrook too have been honouring those who have fought for their country.

"All we have of freedom, all we use or know - / This our fathers bought for us long and long ago."

Pupils dedicated two days to special assemblies and lessons to mark the historic event. Welcoming a Major from the army into their pupil-led Remembrance Prayers, the whole school recognised the centenary of the end of World War I by listening and reflecting upon moving talks on the history and meaning of remembrance, alongside a beautiful presentation on the role of animals in wars, both past and present.

The Upper School pupils also took part in a WWI trench workshop, working brilliantly together filling sandbags in teams. The children learned in a practical way and it served as a reminder about the atrocities their fellow countrymen and beyond endured during the Great War.

On the second day of remembrance, Prayers were more reflective as each year group approached a makeshift trench to lay poppies and a wreath in silence; afterwards a pupil sympathetically recited the famous Wilfred Owen poem Dulce et Decorum Est.

Kitebrook staff and pupils also attended the Remembrance Parade in Moreton-in-Marsh on Sunday 11th; laying a wreath, and their respects, at the War Memorial. 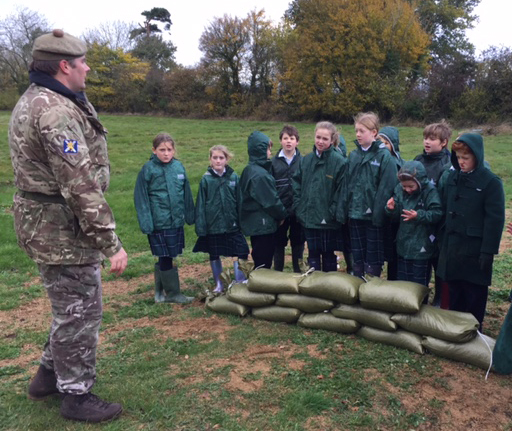 Army Major teaching Upper School how to build a trench